2018 Addendum: TESS (the Transiting Exoplanet Survey Satellite) has just successfully launched and is the exciting new successor to Kepler. Over the next few years TESS is expected to discover thousands of new exoplanets, including hundreds of Earth-sized rocky planets. 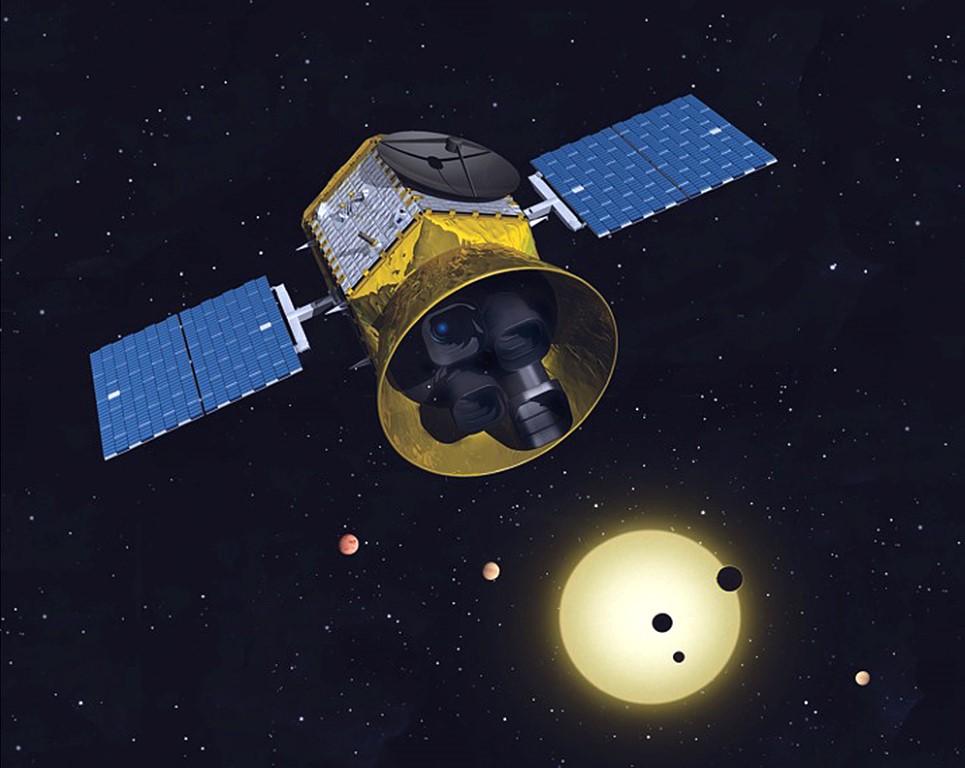 What is the place of humanity in the Universe? Are we alone?

One of the most exciting experiments in history is attempting to give us an answer: the Kepler Mission . It's managed by NASA Ames Research. The Kepler Mission website is excellent, as is the wiki on Kepler .

I've heard three lectures on the project including one (an hour ago) by the designer and Principal Investigator of Kepler,  William Borucki ,who spoke at the Stanford Physics Dept.

Kepler's main mission, in brief, is to find planets that are the size of Earth , that are orbiting at just the right distance from their star to have liquid water , and hence, that are potentially able to sustain life . 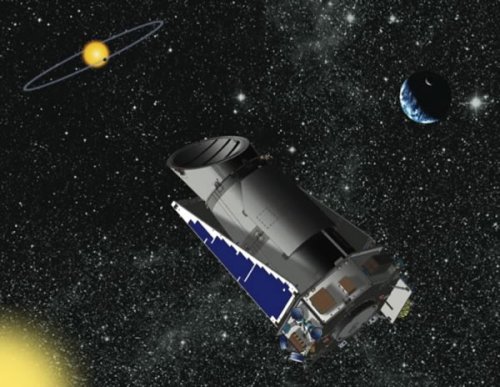 The Kepler telescope was launched on March 7, 2009, over one year ago, and has already discovered five new exoplanets.  (An exoplanet is a planet of a star other than the sun.)

Kepler is orbiting around the sun over three million miles from Earth.

So, why should you be jazzed about Kepler?  The short answer is that within three years Kepler will give us a good idea of whether planets like Earth are common, rare, or maybe even non-existent !  (Non-existence is never possible to prove.)

The picture below shows the concept of a Habitable Zone. Imagine being at a campfire on a cold night. It you get too close, you're too hot; if you get too far away, you freeze. How close you get depends on how hot the fire is. 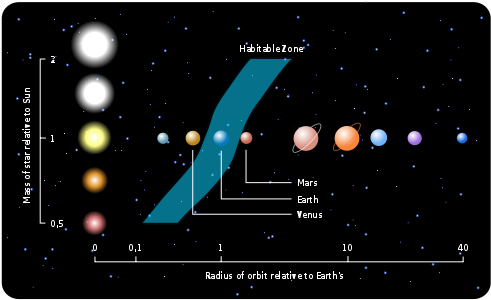 Earth is just right for life.  Like Goldilocks, Earth is not too hot and not too cold, just the right size and distance from its parent star, the Sun.  There are a number of other probable criteria for life that I listed in my essay on SETI, but liquid water for billions of years is criterion number one.

Fifteen years of planet hunting have turned up over 400 exoplanets, but the methods used by previous planet hunters usually are so insensitive (measuring changes in radial velocity) that almost all of these exoplanets are hundred to thousands of times the mass of earth, and so close to their stars that iron would melt. Forget life!  (Previous studies exploit the WOBBLE that is induced in a star by a massive, closely orbiting unseen companion (a giant exoplanet). Imagine watching a glowing, rapidly rotating ice skater from a distance. If you saw that ice skater wobble to-and-fro, you might infer that he was holding his unseen female partner.  Here's how Kepler improves on the wobble method.

Go to Kepler's home page and put your cursor on the glowing star in the upper left hand corner. You will see a little movie of a tiny planet orbiting in front of the star and dimming the light from it as it does - like a moth flying in front of a light.  (Kepler is so sensitive that it can detect the change in light that would be produced by a flea crossing a car headlight at 10 miles!). The wiki article on astronomical transits also nicely illustrates the method. (Here, Yale astronomer Debra Fischer illustrates both the wobble (doppler) method and the transit method. She also shows how to participate in the search for exoplanets.) 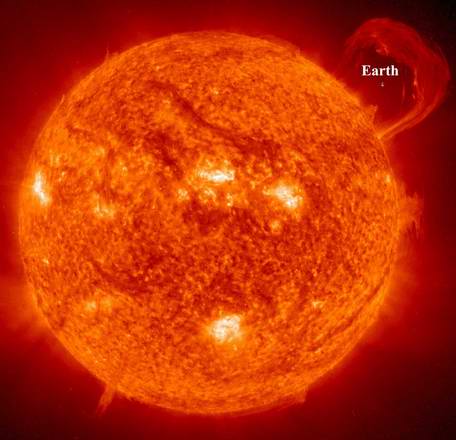 So, for every star, the data that Kepler collects is a graph of the amount of light from that star.  Let's  say you're way out in space looking at a tiny dot of light that is our sun.

Now, you might've noticed that you would NOT be able to see the Earth blocking the Sun unless you were exactly lined up with the plane in which the Earth is rotating. Their calculations have shown that for that reason only 1 in 200 stars with Earth-like planets (0.5%) will be detectable.

So, to find Earth-like planets you need to look continuously at a lot of stars. Kepler is staring fixedly at 150,000 stars in a wonderful part of the sky right by the constellation CYGNUS, the Swan.  During the summer I love watching Cygnus as it flies straight along the Milky Way through thousands of stars in the Summer Triangle.  Kepler's field of view is a square of sky that is 10 degrees on a side.  (The full moon (and coincidentally) the sun are both 1/2 degree in diameter.)  So, Kepler's field of view is a square that is 20 full moons on a side.) 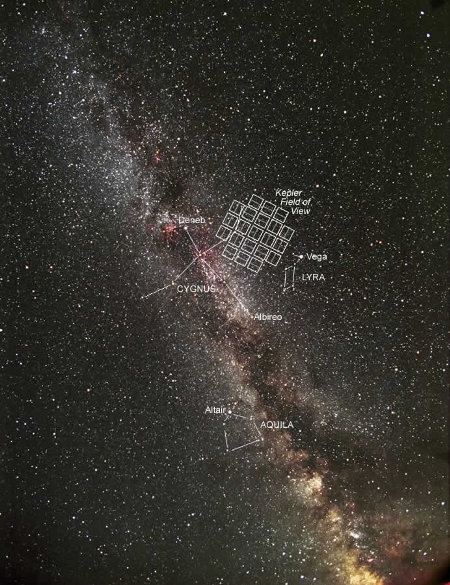 The Kepler star field in Cygnus

Multiply 150,000 stars that Kepler is staring continuously at, looking for dips in light, by 0.5%  and you get 750 possible Earth-like planets that could be detected if each star had one.

The 600 million dollar question (cost of Kepler) is “How many are there?” Are there 750, 42 (the answer from Hitchhiker's Guide to the Galaxy ), or none? The immensely cool thing is that we will KNOW the answer by the end of 2012.

Say the answer is 750 (and actually 200 times that, since the rest did not line up with our line of sight. Well, then Earth-like planets are extremely abundant and humanity can go right back to trashing Earth, knowing that ET is probably out there somewhere or soon will be.  Yeah, we'll lose all of human civilization, culture, and higher life-forms, but so what – they’re replaceable.

Say, the Kepler Mission draws a complete blank - no Earth-like planets, then what? Kind of spooky.  It may mean Earth really is super-special – maybe even one of a kind and we really, really need to take special care of it (we do in any case).  By 2012 we will have a preliminary answer.

Kepler has enough expendables (eg thruster fuel for maintaining position) to last ten years, but so far the mission is only funded for three years. (I cannot imagine that the project will be terminated in 2012.)

Suppose Kepler does discover Earth-like planets; what's next? Take another look at the Drake Equation .  The next of the six mystery factors is f l = the fraction of Earth-like planets on which life actually arose.  That's what we'd really like to know.

As cosmologist Carl Sagan (a SETI trustee) pointed out in Pale Blue Dot , any ET with a powerful enough telescope, even thousands of light years away, could tell that Earth has life.  The CO 2 , water vapor, and ozone in our atmosphere are obvious, tell-tale signs that Earth is teeming with life (and has been for 3.7 billion years). 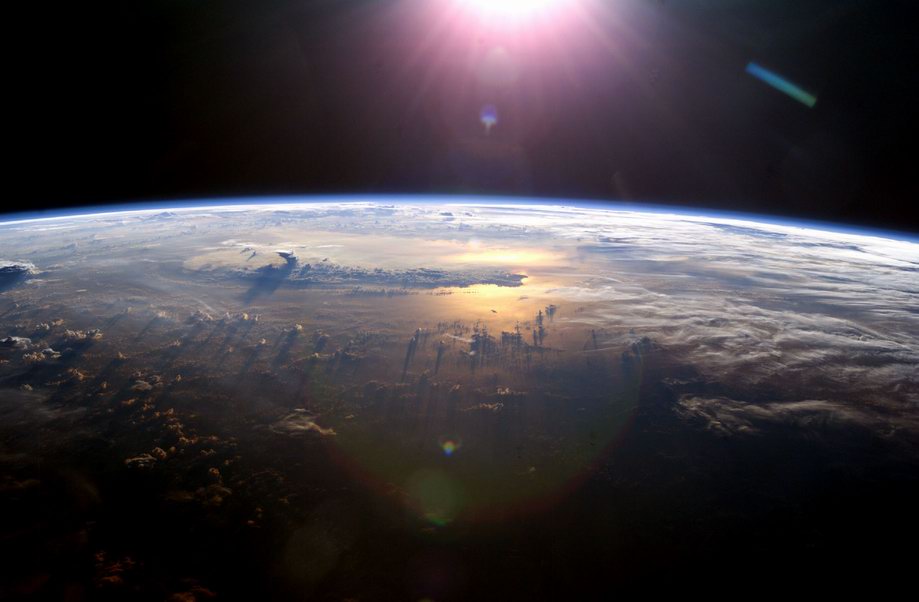 What’s next is the TPF, the Terrestrial Planet Finder , a large space-based telescope that would look carefully at those Earth-like planets discovered by Kepler to see  if they have Earth-like atmospheres containing oxygen and its byproduct, ozone.

Beyond TPF is the next factor in the Drake Equation - the probability of intelligent life. Given that life arose on some planets, as shown by TPF, on how many of those did intelligent life arise? Future very powerful scopes and radio detectors may be able to see the lights of their cities,  their radio and TV broadcasts,  or their large engineering projects (like Dyson spheres - engineered hollow spheres that enclose their entire star to capture all its energy.)  But that's a story for another day. 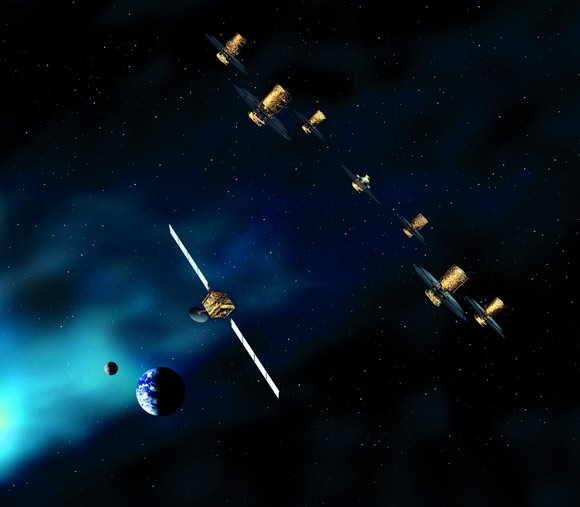 Addendum 14 January 2011: Kepler has just confirmed the discovery of a rocky planet 560 light years away. Here, Dr. Natalie Batalha describes Kepler-10b. (She is a Kepler co-PI.)