Dehaene: Consciousness and the Brain 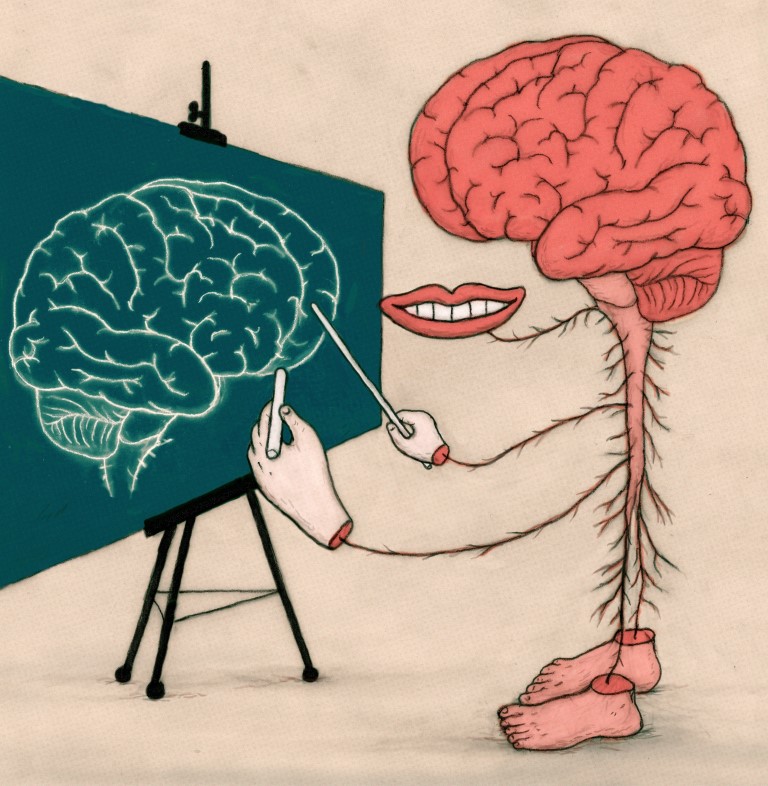 Original art credit to the (wonderful) Jonathon Rosen, as it appeared in the Washington Post .

This is the lead review I wrote for Amazon on a prize-winning 2014 book by Professor Stanislas Dehaene titled Consciousness and the Brain — Deciphering How the Brain Codes Our Thoughts .

The bottomline — for neuroscientists as well as the general public, this is a must-read.

Ignition: A Self-Reinforcing Avalanche (with Panache!)

As a physician and Stanford researcher (initially in artificial intelligence and currently studying cognitive neuroscience),  I've been interested in consciousness for 50 years.

How does the brain create consciousness? And, if this is simply a story of billions of spiking neurons talking to one another, can it be done in silicon?  (If so, this may occasion a profound turning point in human history.)

Dehaene (a professor at the College de France in Paris and director of the INSERM Cognitive Neuroimaging Unit) is one of the world's leading scholars of consciousness. Fortunately for us, his literary agent, John Brockman — of Edge fame — persuaded him to write this popular work.

That Dehaene writes this well in English makes me wonder how spectacularly he must write in his native French.  We're not only transported to the cutting edge of research on consciousness, but the voyage is a thrill.

As expected, Dehaene is thoroughly steeped in the history of consciousness — from Plato, through Descartes, Hume, and the Continental philosophers.  His writing is also filled with references to French art, literature, and humanism — like serotonin molecules, that culture seems to have diffused from the Louvre down the Boulevard Saint-Michel to become bound in this book.

Right from the start — see the beautiful, free Introduction on Amazon — he reminds us that it all began in the caves at Lascaux with the depiction of a dreamer's soul wafting about like a sparrow.

Deftly weaving ancient Egyptian mythology with the Upanishads, he transitions to Descartes and his alleged error.  Rightfully defending his countryman, Dehaene takes contemporary pop-neurosci to task.

Descartes was no dualist (body + immaterial soul) blinded by religion.  Rather, he was genuinely grappling with the central problem of this book and the field. How does conscious perception, reflection, and deliberation eminate from a machine?

In seven chapters, Dehaene carefully steps us through all the evidence (from his large Paris group and the world's other top labs) of the brain's signatures of consciousness.

How can one even study consciousness in the lab?  (Chapter 1) The key innovation was the discovery and exploitation of minimal contrast phenomena.  When presented just too faintly, too rapidly. or when masked, they are completely invisible.  But, increase the intensity, duration, or remove the mask and there they are, plain as day.  I'll list these, but do yourself a favor and go to YouTube to see them for yourself:

Now you see it;  now you don't. (Also, go to Charlie Rose's website and look at the episode on consciousness in which Nobelist Eric Kandel interviews Dehaene and other stars of this field.)

He reviews fascinating experiments that reveal the pervasive and essential role of non-conscious processing in language, vision, hearing, and action.  Consciousness is the tip of the iceberg.

Perhaps consciousness is epiphenomenal (a non-functional add-on, like the roar of a jet plane.) In Chapter 3 he dismisses that old, profoundly counter-intuitive proposition.

His argument here is reminiscent of Kahnemans' Thinking Fast and Slow . Fast (nonconscious) thought is fine for practiced, routine, reflexive speech and action.  But thinking and action marked by careful deliberation and planning requires consciousness: the ability to maintain a percept in working memory and mull it over.

Chapter 4 displays the core findings of the experimental work: the neural signatures of consciousness.   These are what Nobelist Francis Crick and collaborator Christof Koch called the neural correlates of consciousness. See Koch's seminal work The Quest for Consciousness Even invisible, unseen (subliminal) stimuli excite chains of neural firing — but only in primary sensory areas. But, when a stimulus crosses the threshold into consciousness, the neural firing is strongly amplified in both intensity and distribution, as many brain regions ignite (hence, my title) and communicate — especially prefrontal, parietal, and anterior temporal cortices.

In Chapter 5 he describes a tentative theory that accounts for the experimental findings: the global neuronal workspace theory.  I'm old enough to recall the origin of this theory as the blackboard model from 1970s AI research, sponsored by DARPA that led to the then famous Hearsay-II speech understanding system from CMU.

In an interesting quirk of history, this important research work was dragged into oblivion by the AI Winter of the 1980s. But, the theory itself was transmogrified into a theory of consciousness by psychologist Bernard Baars. (See Baars' 1988 A Cognitive Theory of Consciousness .)

With the 1990 advent of fMRI, this theory became ripe for experimental verification. Entrez Professeur Dehaene! Not only can he explain the lab details from Chapter 4, he also built a computer simulation of spiking neural networks that exhibits the same behavior.

By the way, Europe has just embarked on a ten year 1.3 billion dollar project to simulate the human brain.  While this project may seem irrationally ambitious — even to protesting European neuroscientists — I'm comforted in knowing that Dehaene is one of the scientists at the helm.

Chapter 6 deals with the crucial topic of coma and vegetative states.  It opens poignantly with the case of Jean-Dominique Bauby, the Editor of Elle, who had a brain stem stroke, and though entirely paralyzed (save for one eye), wrote an entire book The Diving Bell and The Butterfly by blinking that eye.  EEG, MEG, and fMRI signatures of consciousness may in the future help us decide which coma patients are conscious (but locked-in) and which are not.

Five stars for both scientific and literary merit.