The Future of Memory 2017:
Nantero NRAM and Intel 3D XPoint 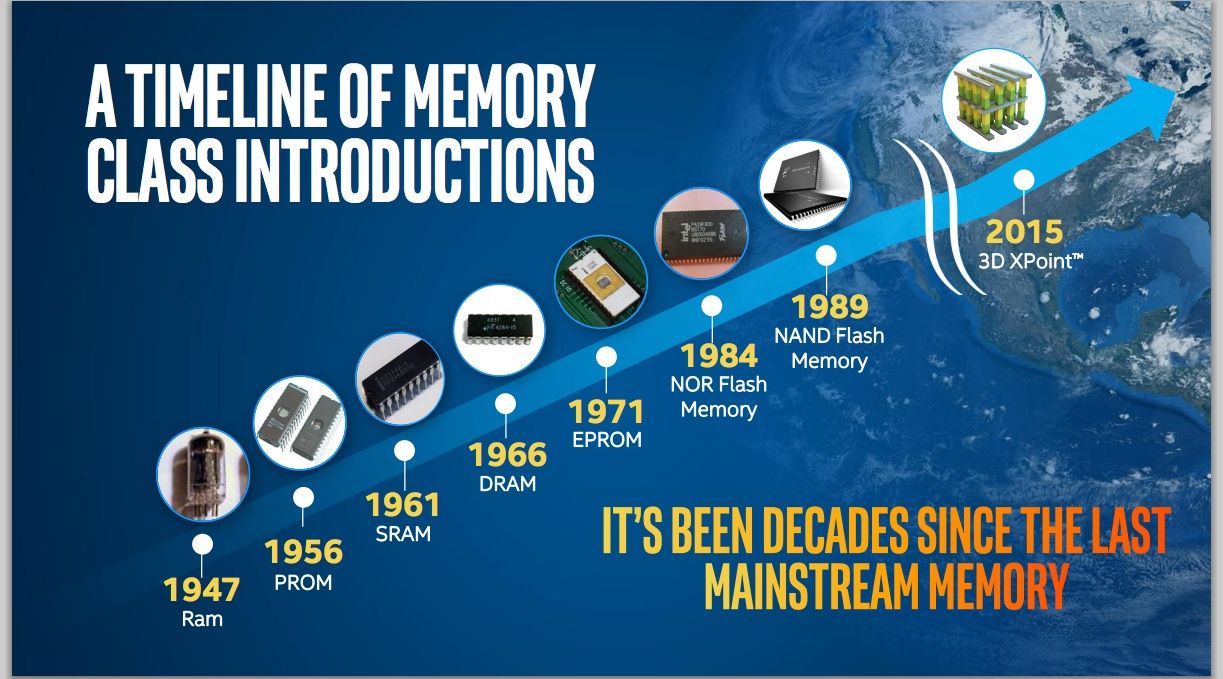 Since Gutenberg's printing press in 1436, memory technology has exponentially improved. Moore's Law (the doubling of CMOS transistors every two years) has documented this trend in the past half century. But will it continue?

The prospects are bright, and foremost among those exciting prospects are two that will be rolled out in the next couple of years, namely, Nantero's carbon nanotube NRAM (non-volatile RAM) and Intel's Optane 3D XPoint memory.

I've followed Nantero for over a decade, since I first heard it pitched by famed venture capitalist, Steve Jurvetson, an early backer. Nantero's proprietary tech is a fabric made of CNTs (carbon nanotubes) that is spin coated directly onto a CMOS transistor layer. 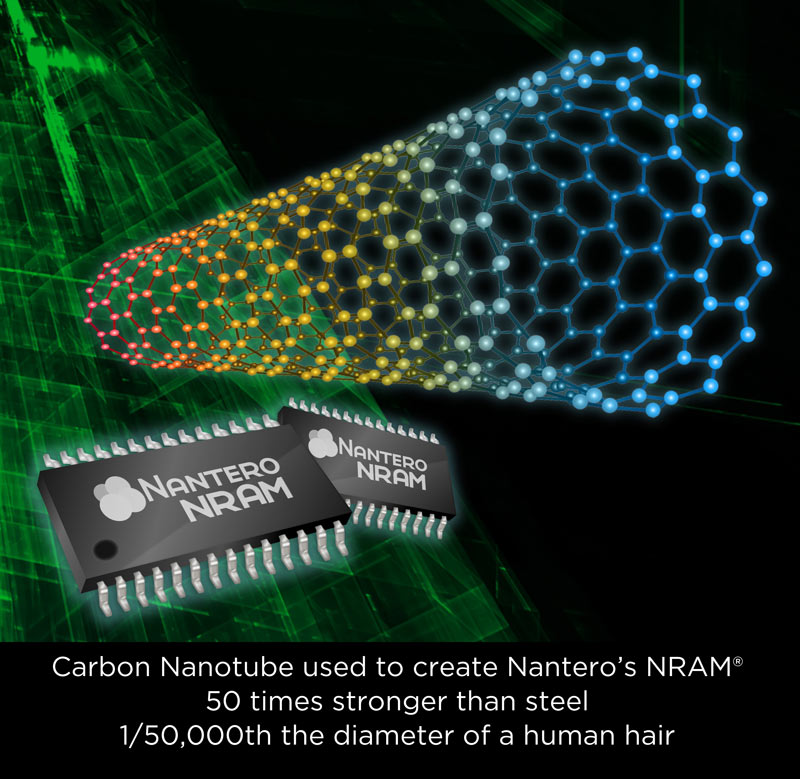 A carbon nanotube is about one nanometer in diameter;
so, 50,000 X = 50 microns, the diameter of a single hair.

Many well known memory firms, including IBM and Intel, have struggled to commercialize CNTs. They're easy to make but extremely difficult to purify, align, and connect, as discussed here by IBM CNT chief George Tulevski.

Nantero pulls it off using static charge (opposites attract) to pull serendipitously adjacent nanotubes into mechanical contact to create a ONE (and a ZERO when separated, as below.)

This mechanical switching happens in picoseconds, so, it's only limited in speed by the DRAM transistors used to read and write it (100X faster than NAND flash (here I assume your old rotating hard drives are just used as paper weights.)) Furthermore, like a light switch, it draws almost no power when off. 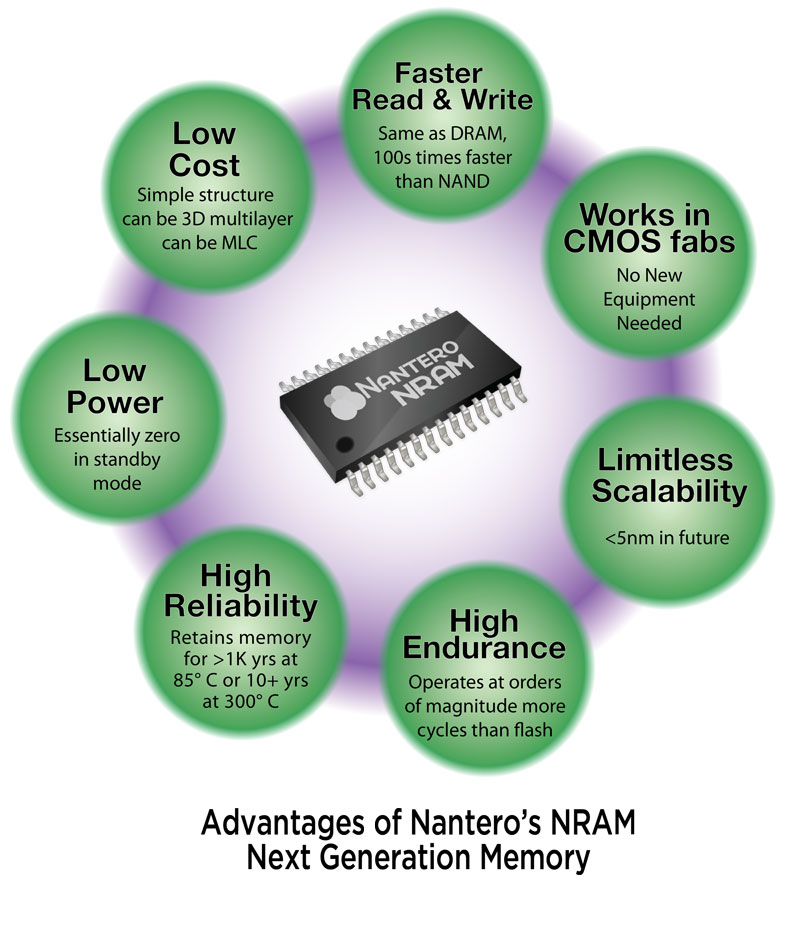 Nantero's NRAM portends an era of instant-on computers, laptops, and smartphones. A looming, huge market will be in robots and self-driving cars. With only intermittent connectivity to the web, those cars will need to instantly and reliably interpret their visual surroundings. NRAM will make that possible.

Products using Nantero's NRAM are expected to be on the market in 2018. The company just racked up another $21 million investment from Fujitsu to assure that happens. This Nantero review in Tom's Hardware is excellent. And here, Nantero's CEO and CTO present their tech.

Intel and Micron created a huge buzz in 2015 when they announced a fundamental memory breakthrough they called 3D XPoint (that's pronounced cross point.) Their announcement claimed that XPoint would be 1000X faster and more durable than NAND flash and 10X as dense as DRAM. 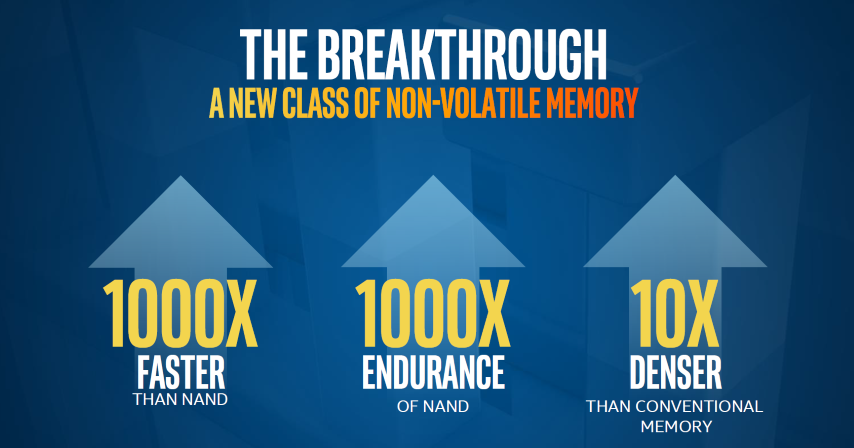 Crossbar architectures have been bandied about for decades, but the precise tech (materials and specs) of Intel's product was just hinted at in 2015. Industry pundits were effusive. As usual, AnandTech had one of the best summaries.

Like contemporary NAND flash (as in my many cheap but wonderful Samsung 850 SSDs), 3D XPoint will be multilayer. But, unlike NAND, Intel's XPoint will store data by using permanent (non-volatile) changes in conductivity of the underlying material. (This has not yet been detailed but is likely to be some form of PCM (phase change material), perhaps a chalcogenide (a glass whose conductivity changes when heated.))

With its crossbar architecture, XPoint will be bit addressable, simply by activating a given pair of intersecting wires (as in a screen door.) 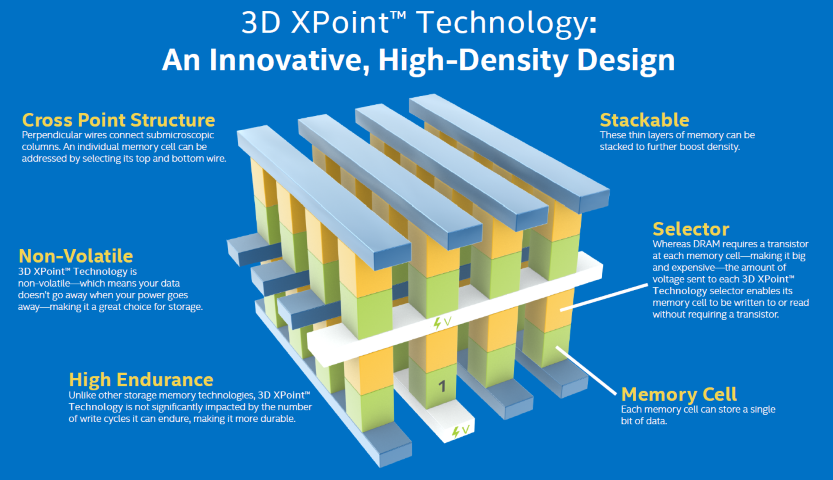 So, that's what we knew in summer of 2015 when Brian Krzanich, CEO of Intel, and Rob Crooke, VP of storage tech, announced XPoint to a rapt world.

In 2016 we saw several spectacular demos of 3D XPoint - see for example, this demo from Intel's 2016 IDF in Shenzhen in which Rob copies a 25 gigabyte file in 15 seconds! In this demo he used an early prototype of 3D XPoint that Intel will bring to market (as Optane) in 2017.

Initially, of course, Optane won't be cheap, and therefore will be introduced as a cloud/ server product and subsequently in high-end gaming PCs. In 2017 Motley Fool reported the expected rollout of Intel's Optane 3D XPoint as announced by CEO Brian Krzanich in their 2016 fall quarter call.

Why the excitement about these memory technologies? By promising to keep Moore's Law going for another few generations, they portend an era that will impact all our lives:

Here's an excellent 2019 Moore's Law update, centered around a recent Hot Chips talk by Stanford's Professor Philip Wong (who is also a VP of research at Taiwan Semiconductor.) And, here is Dr. Wong's talk (HC31-K2) itself.