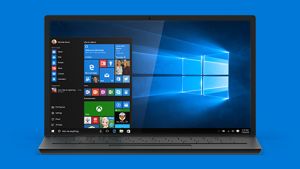 Windows 10 — this stupid little problem (among others) kept me away til now.

After Microsoft started their forced cram-downs of Win10 in December, 2015, I thought, "Ah, poo-poo — I'll knuckle under." So, I put a blank SSD into my trusty Win7 tower (the case is always open,) and let MSFT overwrite my venerable Win7 (see next story.)

One of the little nagging problems I had was that I couldn't reliably drag the active window with my mouse. So, I swore at it for a week (there were other problems, too) and then I reinstalled my trusty Win7 (by just plugging in another SSD.)

The answer to this one is really easy. But, honestly, why didn't Microsoft crack this in a user focus group? (Please, don't get me started! Just look at their stock chart relative to Apple. I devoted a whole article to What's wrong at Microsoft.)

The Problem: Dragging Windows with the Mouse

If you're like me (you are!) you take your mouse and put the cursor over the title bar at the very top of the active window. Then you drag the window to where you want it — to another monitor. Or, you take a shrunken window and slam it against the top of the monitor to expand it to full size. Everybody does that, right?

Well, for some reason (it took me several days to figure this out) the window would move sometimes and not at other times (and in some programs and not other programs.)

The Problem: Part 2 — the new title bars are all white

The result is that in some programs you just cannot tell where the title bar ends and (for example) the URL bar below it begins.

How can they be that stupid? Where were the user focus groups? (I guess that's part of why Steve Ballmer was replaced.) Look at the stock chart! This has been dead money for 15 years.

The Solution: The Cursor Must be at the Very Top of the Window

So trivial, really — and, yet so frustrating! You can only drag the window, if the cursor is actually IN the title bar at the very, very top of the window (and not even a tiny bit below it. ) So, simple. Try it!

Before you take off, here's another weird little problem in Windows 10. The new, very speedy EDGE browser does not display the entire URL of the website in the address bar. Why not? I have no idea. Just another royal pain. (For example, are you actually at your bank's secure website (https) or at the site of some spoofing pirate?)

The solution to that one's easy. Just make Google's Chrome your default browser. (C'mon, Satya. Don't you want your bonus?)

Another problem that caused me a day of heartache was trying to transfer my old email files from MicrosoftLive Mail (Livemail used to be Windows Outlook Express) to Outlook 2016. Forget it! It can't be done! (I can't possibly be the only one who used Windows Live Mail for years.) Another, stupid time sink.

The insane kludge that I finally settled on was transferring my files from Win Live Mail to Gmail using IMAP. But, even that was just a buggy, partial success. Not recommended. Win Outlook 2016 does work well, but don't try to sync with Outlook.com . (As of June, 2016 the best online email is Gmail.) I do like the desktop experience with Outlook 2016 — it's superior to Gmail.

Finally, another tiny but annoying problem that I solved long ago. If you use WORDPAD as your default note-taker for making fast notes, you've surely noticed that it's default is to double space. Why? Who knows? (BTW, never, ever use WORD unless you really need to — it's been larded up with fat for decades.)

The solution is to use this little free gem. It's called WORDPADFIX. It's a small, freeware download and works great.

Here's one more — this one is so important it deserves an entirely separate article.

What program should you use to edit photos (eg, a jpg?) It's got a one word answer — IrfanView . Kind of a weird name, but the developer of this freeware, Irfan Skiljan, deserves a giant statue in Redmond in front of Microsoft HQ. Honestly guys! One guy (Irfan) can out-program your entire corps (as in corpse.) Look at this YouTube. IrfanView gets a million downloads per month! I use it everyday.

Readers please note: After less than the usual two weeks of swearing, I began to appreciate Win10. (I remain happy with it in 2022. Also note: Satya Nadella appears to've been an able CEO.)