Book Review: How to Create a Mind 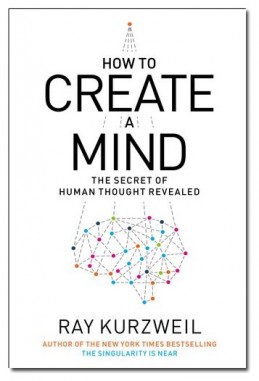 Ray Kurzweil's latest book, How to Create a Mind, came out in November, 2012. While the highly anticipated work is worth reading, it did not (at least for me) live up to the high standard set by his previous work, The Singularity is Near (By the way, Ray's charts in The Singularity are required viewing.) My review appears below.

Does the Cortex Spin its Tales with Markov Models?

Like a news commentator explaining a bad day on Wall Street, the cortex has an explanation for everything — it generates our subjective universe. To paraphrase George Box, all our brain's models of the world are wrong, but some are useful, generative, and simple (but not too simple).

In How to Create a Mind acclaimed inventor Ray Kurzweil puts forth a model of how the brain works: the pattern recognition theory of mind (PRTM.) The brain successively interiorizes the world as a set of patterns.

Kurzweil's framework uses hierarchical hidden Markov models (HHMMs) as its main stock in trade. HHMMs add to the PRTM model the notion that those patterns are arranged into a hierarchy of nodes, where each node is an ordered sequence of probabilistically matched lower nodes.

So, the key question for me is this: are HHMMs really the key to understanding and building a mind?

Ray has been on this track since the sixties, when he and I were classmates at MIT. In a spectacular career spanning decades, Ray invented systems for OmniPage OCR, text to speech (famously for Stevie Wonder), and automated speech recognition as in Dragon Naturally Speaking. Nuance bought Ray's precursor company.

All automatic speech recognition nowadays is done using HHMMs, and the results are astounding. For example, see Microsoft Research Chief Rick Rashid's YouTube "Speech Recognition Breakthrough." A computer transcription of Rick's talk appears in real time and is quite accurate.

The amazing success of HHMMs in handling speech and language is a story that needs to be understood by AI aficionados, and Kurzweil presents this topic in a beautifully comprehensible exposition.

Kurzweil elaborates a story here that 1) the cortex is the key to thought; 2) it is hierarchically organized into 300 million pattern recognizers; 3) each pattern recognizer consists of a 100 neurons in a vertical minicolumn, and 4) those pattern recognizers communicate with one another via a Manhattan-like grid (similar to an FPGA) - end of story for the neocortex.

This is a story similar to the one told by entrepreneur Jeff Hawkins in On Intelligence, and one that Hawkins, his former associate Dileep George (now at Vicarious), and Kurzweil himself are trying to capitalize on in cortex-engineering startups. I eagerly follow their results.

So, HHMMs work well and are a required part of a computational neuroscience curriculum, but ARE THEY THE MASTER KEY that will unlock the doors not only to a full understanding of the mind but also to a future of superintelligent AIs? How to Create a Mind is a good story but IS IT FICTION or nonfiction?

While HHMMs are required reading for automatic speech recognition, they DO NOT DO all the brain's heavy-lifting. Rather, the brain employs MANY mechanisms (which robots that aspire to humanity may need to incorporate or emulate.)

Five stars for HHMM exposition. Subtract one star for giving short shrift to the following pivotal neuroscience principles: 1) attentional mechanisms, 2) brain-wide dynamical networks, 3) gamma oscillations and inhibitory networks and also 5) the role of insula and brain stem in emotion, 6) reward based learning including the essential role of basal ganglia and midbrain, and 7) hippocampus and memory.

Despite its corticocentric focus, Kurzweil's impressive engineering successes make this an important story; furthermore, it is engagingly told. I cover neuroscience and AI at bobblum.com . Below are two recent

See the videos at NENGO > Videos > Collection of Spaun. That is the state of the art!

Back To The Top