Understanding the Feel of
of Consciousness 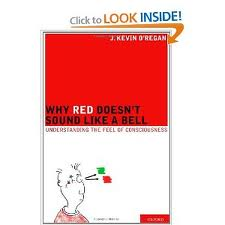 Look closely at the title above. Did you see the two "of"s ? The book's author, Kevin O'Regan, pioneered research on change/ inattentional blindness.

This is an expanded version of a book review I wrote that originally appeared on Amazon.

I review Kevin O'Regan's 2011 work Why Red Doesn't Sound Like a Bell: Understanding the Feel of Consciousness . As I indicate below, it's hard to do the work and its underlying theory (sensorimotor theory = SMT) justice in a brief review. For readers who wish to explore SMT in greater detail (and the critical response to it), I've included references below.

The best medium length summary of SMT — and the intense criticism it engendered — appeared at the end of the original article on SMT published in 2001 by Kevin O'Regan and Alva Noe in Behavioral and Brain Sciences. That commentary is essential reading for those who take SMT as bedrock, scientific truth (I do not, although it's partially correct and - more importantly - it's provocative and generative.)

Nothing could be more scientifically fundamental than our own consciousness. Everything we experience and know passes through that window.

Here's a book that squarely tackles the problem head-on, and it's written by a well-known director of a major center of neuropsychological research in Paris.

I myself have been fascinated by this topic since my undergraduate days fifty years ago at MIT and have returned to studying it full-time at Stanford, following careers in AI and in clinical medicine.

I was plodding through a detailed paper on the ventral and dorsal visual pathways by O'Regan's co-director Andrei Gorea, when I discovered this popular work and rushed to read it. Now, having spent days with it and with the author's online publications, I will comment on both the book and the theory it propounds.

I'm always astounded when a book like this attracts so few commentators. What's going on?

One obvious detail is that the book is overpriced. I attribute that to Oxford University Press's newness to the world of online publishing a la Kindle. OK, academic libraries will buy a copy no matter what the price, but ordinary mortals won't. Until a week ago, the hardcopy cost 45 bucks (that's about 25 cents a page - yes, it's packed with valuable, fat memes but they're in a skinny volume).

I resorted to biking onto campus to read in situ Stanford's only copy. There are none in dozens of local public libraries. At minimum, the Kindle price needs to be dropped substantially.

Before transitioning from the topic of availability, Kevin O'Regan (hereinafter = KOR), does want the ideas to be widely disseminated, and here's how to get them for free.

Laudably, BBS takes a controversial treatise like this, and distributes it planet-wide for comment. The theory engendered a maelstrom of criticism — the critics and their comments are world-class. Now, on to the book and then the theory itself.

The book itself is engagingly written for laymen who want to understand consciousness. The explanations are beautifully clear, easy to follow, and charmingly illustrated. This is a lay presentation of sensorimotor theory, which I first heard about when KOR's collaborator, Alva Noe (=AN), presented it on a book tour. (Some audience members were noticeably hostile to the ideas.)

I cannot do sensorimotor theory (SMT) justice in this review, but I need to at least summarize it. It stands in contrast with the standard view of vision that prevails in neuroscience. Characterizing the latter - you can see because your brain makes a model or representation of the outside world encoded by neural impulses.

OK. But, why were the rabid dogs at Alva Noe's book presentation so enraged — despite his being such a nice guy? What about dreams? What about hallucinations? How about perceptions in paralyzed people? These all seem like obvious counter-examples to SMT.

Consider dreams — there is no outside world to interact with, and what's more, you're paralyzed in hypnogogic sleep. KOR and AN retreat (or explain) by saying they don't really mean that continuous, real-time motor exploration of the outside world is needed. It may be enough (as in dreams) if it happened in the past and left traces of the interaction. But those engrams are just used nonconsciously, they would argue, and do not comprise the current visual percept.

Unfortunately, I'm running out of room — but what's a detailed review of a neurophilosophical theory doing anyway amidst the detritus of baby diapers and consumer gizmos at Amazon. I'll discuss this at greater length on my website. (reader: please return here in September . Like Parisians, I disappear every August.)

My bottom line: I would definitely have bought this book if it was priced right. It was obviously a labor of love as can be appreciated from the author's online materials. There are many aspects to sensorimotor theory, not all of which are as controversial as the one I discussed.

For example, it's emphasis on grappling the real world has a celebrated history from Henri Bergson to J. J. Gibson's affordances and is now being rediscovered by roboticists.

I am unconvinced by KOR's expositions that qualia reside only in the external world, but — ignoring that — there are many delights here (eg. his co-discovery of change blindness) that merit perusing this work. (I intentionally included two "of"s in the title of the article you are now reading.)

The issues of whether qualia have been explained and the mechanisms by which the brain generates them (yes, I disagree with KOR) could not be of greater importance. Qualia are the mind's currency that it uses to evaluate all it's decisions. Robots without qualia could be sociopathic unconscious automata.

Whether we wish it or not, decisions that profoundly affect humanity will increasingly be made by machines (as they now are by machine-like corporations). Qualia are essential to wisdom. Without understanding qualia in ourselves, there is little hope of imbuing robots with qualia. It's essential to get this right.