China's extensive video surveillance and social credit systems are viewed as the AI path to eternal peace in the Middle Kingdom. At least that's the view from the Great Hall of the People by the Chinese Communist Party (the CCP.) Of course, in the West these systems are viewed less favorably — more as a prelude to an Orwellian 1984 totalitarian state. 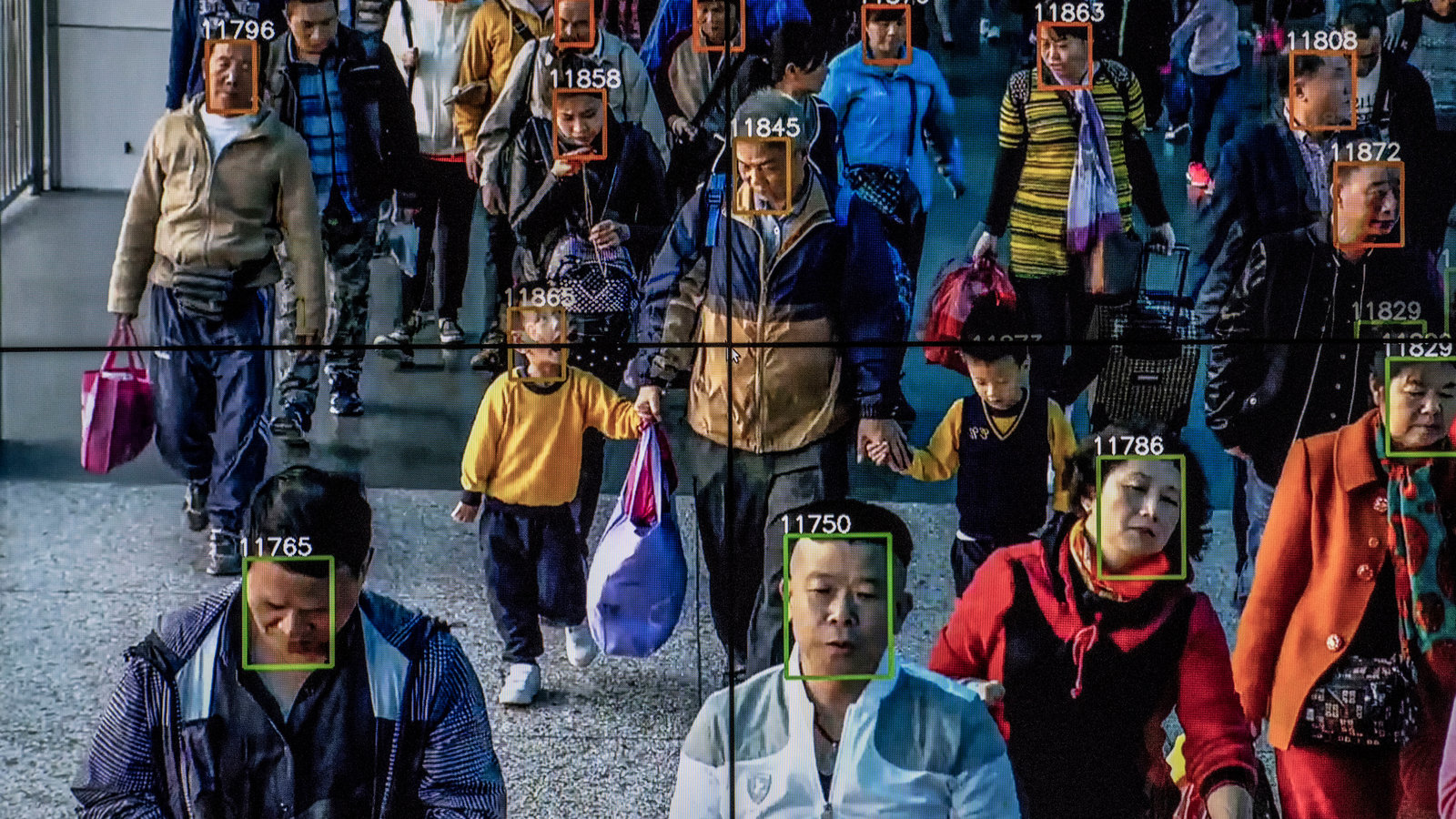 Most of China's 1.4 billion citizens are constantly online, making purchases using WeChat or AliPay, calling friends, looking at videos using TenCent or its subsidiary TikTok, or just navigating the physical world to get to work or to travel. As in South Korea, the cellphone penetration is something to behold: 1.5 billion cellphones for a population of 1.4 billion. In common with other developing nations, China leap-frogged over the era of bank accounts and credit cards directly to the era of smartphones, QR codes, and online shopping and bill payments.

The exponential growth of the Chinese "BAT" megafirms — B for Baidu, A for Alibaba (which owns AliPay,) and T for TenCent (which owns WeChat) — has enabled this trend. Roughly speaking Baidu = Google; Alibaba = Amazon; and TenCent = Facebook+PayPal+Netflix. Built with a combination of heavy state investment and both Chinese and American venture capital, those companies dominate the PRC's internet firmament.

Of course, this has been a data gold mine for the CCP. In combination with 200 million video cameras (soon to be 600 million cameras), Chinese citizens will be under constant surveillance. The expectation is — "privacy? What's that?" William Gibson in his 1984 cyberpunk novel Neuromancer said "only criminals use cash."

Everything is tracked — your spending habits (are you buying baby diapers (score goes up) or vodka (score goes down)); are you picking up litter or throwing trash on the streets; are you speeding or jay-walking (bad) or helping the elderly (good); are you praising the government (good) or complaining (bad.) The scores, ranging from zero to 1050+ are reminiscent of credit scores in the West used by the big three credit bureaus to assess financial responsibility.

But, unlike the credit scores in America, no one has recourse to correct errors. There is no one to appeal to, as one Chinese investigative journalist discovered when his life was ruined after he reported acts of corruption by a government official. Investigative journalism is discouraged and blowing the whistle on officials may get you or your relatives jailed or worse. The CCP's reflexive squashing of dissent was well-illustrated by Wuhan-based, ophthalmologist Li Wenliang who was among the first to warn of the lethality of Covid-19. He later died after he contracted it. As I discuss, the source of the Covid-19 pandemic is still unknown. 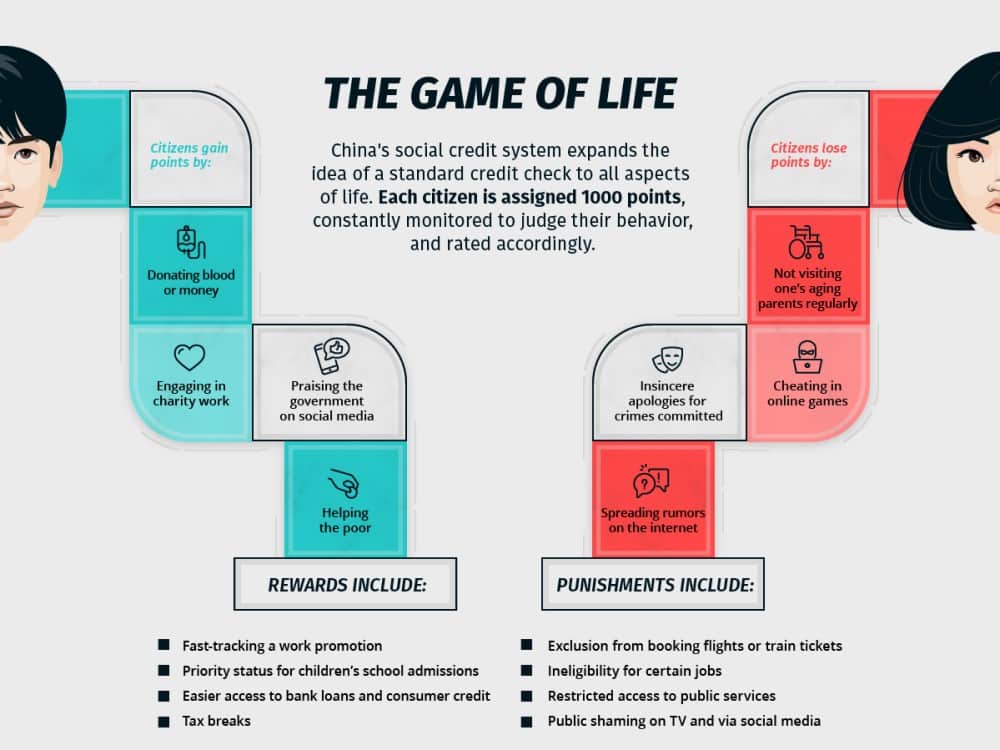 While the budget for the People's Liberation Army is huge ($178 billion in 2020,) the budget for internal, domestic security is twice as big. Millions of watchers are employed to report on goings-on in every neighborhood. Their reports are all grist for the big AI that combines online shopping data with reports of behavioral transgressions, location data, and data on daily habits of citizens (work performance and allegiance to the state, etc.)

According to prominent academic Zhang Weiwei almost nothing is more important to the Party than social harmony. And, that harmony seems evident when one sees throngs of Chinese shoppers at a mall or enjoying life on the streets. They certainly don't look oppressed (unless you're a jailed Hong Kong protester or one of the millions caught "being Uyghur" and sent to a Xinjiang "re-education" camp.

My view is that the rollout of technology like this is almost inevitable worldwide. An advantage that we in the West have is our on-going public dialog among technologists, civil libertarians, politicians, and voters to determine where we wish to reside on the spectrum between rugged (and unmonitored, unpoliced) individualism versus the omnipresent, watchful eye of the state. Having suffered two world wars at the hands of Germany and the Axis powers, the Europeans (even more than Americans) are at the forefront of protesting against this heavy state intrusiveness, eg with the widely debated GDPR (General Data Protection Regulation.) However, it seems inevitable that Russia and many of China's Belt & Road client states will enthusiastically import these systems

In a Google talk in 2019 venture capitalist Henry Shi laid out the perfect strategy for obtaining venture capital from the Chinese Communist Party (the CCP) — give them exactly what they want. (He is more politic and less brash than I will be here; he needs to avoid angering the Party bosses.)

The CCP is obsessed with state security; that's their number one goal - maintaining and growing the strength of the Party. What better way to do that than to keep track of all 1.4 billion of your citizens. ( The wearing of masks to ward off Covid-19 by Hong Kong protesters was a complicating factor for the watchful cameras employed by mainland authorities. Blocking cameras may also have been a useful tactic in the Umbrella Revolution in 2014 Hong Kong.)

So, VC Henry Shi points out that by far the CCP's largest AI investment was 2.6 billion dollars into facial recognition firm SenseTime, the largest of four firms competing in this space. Founded in 2014 SenseTime is the world's leader in facial recognition. Here, founder Li Xu discusses SenseTime software at an Nvidia event in 2016. Here at CogX in 2019 co-founder Xu Bing shows the many uses of image recognition for garbage detection, parking enforcement, fire detection, food security, and hospital security. 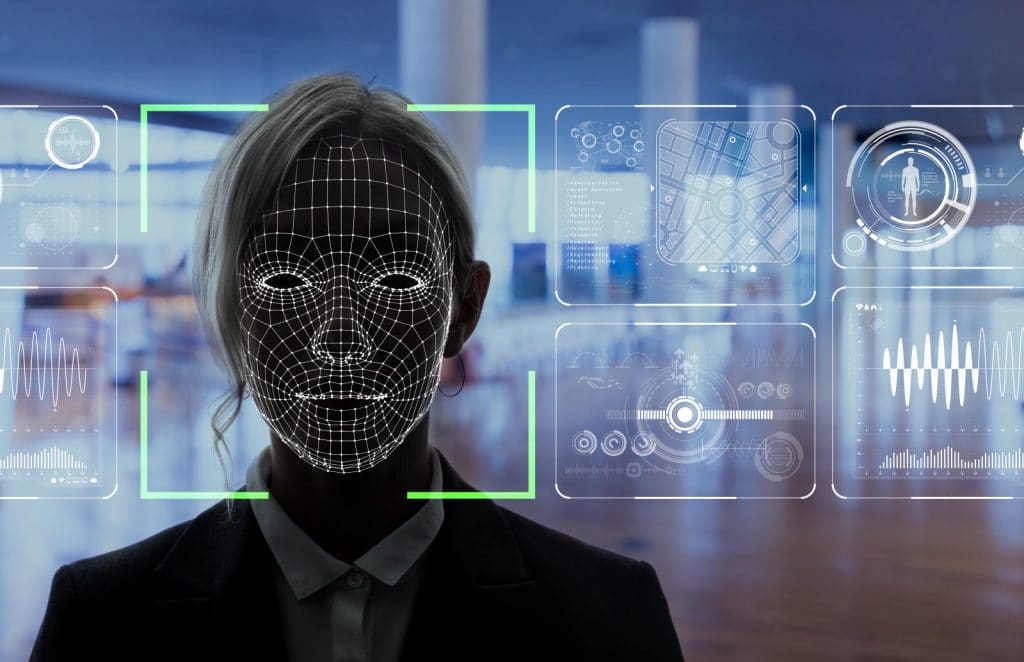 Although SenseTime was founded in Hong Kong in 2014, most of its VC funding and revenue comes from the PRC with large contracts for surveillance systems. Based on its academic research, SenseTime established a collaboration with MIT in 2018. However, this was cancelled by MIT in 2020 due to use of SenseTime's software in Xinjiang where it's been tied to persecution of Uyghurs.

Second largest in facial recognition is Megvii — meg-vii translates to megavision, which is currently valued at $4.5 billion. Wired reporter, Tom Simonite, reports here on Megvii's founding in 2012 by two Tsinghua University AI vision aces and the subsequent rise of the company fueled by CCP funds. The name for the CCP's massive AI-based video surveillance system is a guaranteed crowd-pleaser for Terminator fans: Skynet!

When you have 200 million installed cameras and want to install 400 million more, it's impossible to have humans inspect all that video footage. The perfect solution is AI image recognition software. Furthermore, that software can be used for many other applications, eg in driveless cars, in manufacturing, and for security for homes and private firms.

Another advantage is that SenseTime and its competitors can sell their software to the scores of countries in the Belt and Road Initiative. That some of those countries might be ruled by repressive dictators may (shall we say) not be a deterring factor.

While it's easy to condemn image recognition systems (rightfully) for their role in government-enforced surveillance, their role in commerce and in smart cities programs may be less egregious. SenseTime advertises their role in fire detection, garbage collection, keeping dangerous objects off city streets, and financial benefits dispersal.

What's next in AI-based image recognition? Once you go beyond identifying static images (ie individual frames from a video camera) you move to the domain of video segmentation and behavior identification. For example, in an American football game that would entail knowing when the ball has been being hiked, when the quarterback is looking for a receiver, and when he throws the ball. For a self-driving car, it might be used to determine the intentions of cyclists or pedestrians or when a policeman wants you to stop. Doing this is at the research stage, but I expect that Chinese R & D efforts, fueled by heavy state subsidies, may soon exceed even efforts in the West.

I welcome substantive comments on all my articles. With your permission I may include excerpts. You can post here anonymously, but to do so you should have a verifiable identity, eg a website, Linked-in ID, or Facebook page, etc. Mail comments to bob AT bobblum DOT com (with the usual syntax.)

It is not true that only Orwellian outcomes result from nationwide surveillance.

Your essay correctly observes the ways in which China has deployed and used various forms of (mostly) video surveillance That is what the CCP has been doing. But, of course, there are many possible uses of surveillance that are potentially beneficial to the nation, to communities, and to individuals.

Food. The FDA is responsible for surveilling the food that Americans consume. Surveillance can detect and help avoid issues with contaminants such as Salmonella and E. coli. Community water services are meant to assure the safe quality of the water we drink. They take steps to advise us what to do when the water is not safe to consume or bathe in.

Health. In countries where there's a national health service, it's possible to detect the presence and spread of specific dangers and illnesses. Pandemic spread is not necessarily the only outcome of individuals contracting dangerous and transmisible illnesses.

Imports. Customs services at international ports of entry are intended to assure the safety of whatever is being imported.

Facebook. In my opinion, however, the surveillance and use by Facebook poses a far greater threat to democracy than all of the video cameras that line the streets of our cities. The misuse and spread of individual's data is at the root of the broken state of America's politics. The use —by foreign powers—to meddle with US elections is treasonous. It should not be allowed.

And so on. In conclusion: Surveillance isn't good or bad. It's just data. The data can be used for good — or misused. That's about the people who have the data and control it, not the technologies themselves.

Excellent points. Both SenseTime and Megvii emphasize the many beneficial uses of their image recognition tech. More controversially, the PRC and those companies refer to their video surveillance tech euphemistically as part of their "smart cities" program.

An important distinction with Facebook (FB) is that one's participation is voluntary. That, however, has not seemed to spare FB from being a target of Congress or the EU's GDPR regs.

The Democrat vs Republican filter bubbles (and misinformation) blown up by social media seems to've been catastrophic.